On May 26, 2020, White Minneapolis police officer Derek Chauvin knelt for 9 minutes and 29 seconds on the neck of George Floyd, a Black man, which ended his life. In the hours, days, and weeks that followed, Holy Trinity found itself at the heart of the explosive response to this brutal killing and the centuries of trauma that preceded it. By now the whole world knows the story. We have seen the violent arrest images and video. The temptation is to look away; the violence is too barbaric, the pain too great. But the Christian call in the face of suffering is to see, to confess, to grieve, to protest, to demand a world that none of us have yet experienced.

“What happens to a dream deferred?
Does it dry up
like a raisin in the sun?
Or fester like a sore--
And then run?
Does it stink like rotten meat?
Or crust and sugar over--
like a syrupy sweet?
Maybe it just sags
like a heavy load.
Or does it explode?” 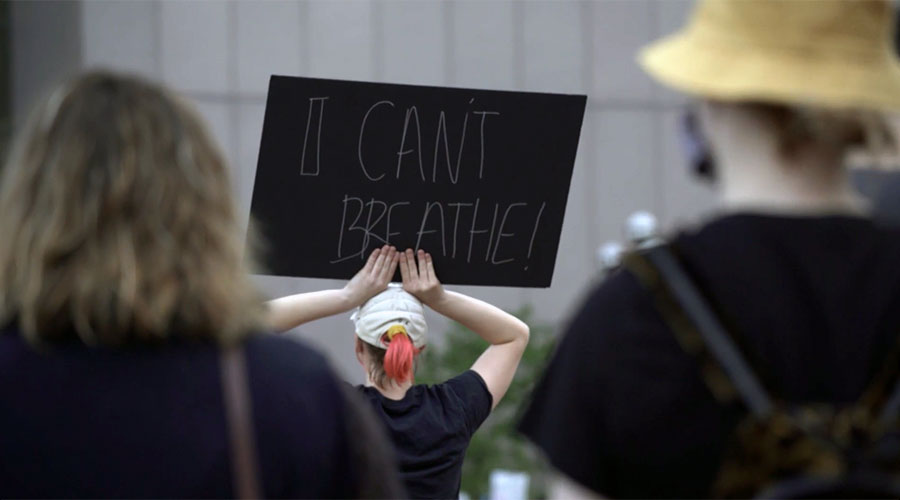 Holy Trinity’s building is located just east of the Minneapolis 3rd Police Precinct. Our neighborhood was where protests sprang up in the hours and days following the wide circulation of bystander video of George Floyd’s death.

Late on Wednesday, May 27, as social unrest and righteous anger erupted around us, we opened the church building as a medic station under the leadership of congregants with extensive protest experience, and in partnership with Minnesota Interfaith Power and Light. Protests continued throughout the day on May 28 and conflict escalated as darkness fell. We opened the church as a medic station for a second night.

That night, the fires inched closer. We grieved as we learned nearly all the buildings that bordered the alley on the west side of our building had been engulfed by flames. We also observed with wonder and humility that our own building and the two affordable housing apartment buildings built by the church remained in good condition.

It’s tempting to focus our attention on the destruction that the neighborhood experienced. Yet, these are but symptoms of a society that has suffered for far too long under the crushing weight of inequality. As Holy Trinity Pastor Angela Khabeb observed after the burning, looting, and destruction of our neighborhood,

“There are different kinds of fires. There are white nationalists who are armed and want to incite a race war. Then there’s a fire that cannot be extinguished except by justice.”

Frederick Douglass said, “Where justice is denied, where poverty is enforced, where ignorance prevails, and where any one class is made to feel that society is an organized conspiracy to oppress, rob, and degrade them, neither persons nor properties will be safe. The connection between people and property is important. Slave patrols were the root of our modern-day police forces. Throughout American history, property has consistently mattered more than Black lives.”

“This morning I saw that our neighborhood store has armed people outside to protect it. When that store opens up, I’m going to go inside and ask the owners, “What in here is worth my life? Show me one thing in this store that’s worth killing me for.”

Pastor Ingrid Rasmussen recorded a Facebook Live video showing the state of the neighborhood on the morning of May 29, 2002.

During this time of unrest, residents of our neighborhood suffered a great trauma. They also found themselves without easy access to groceries or other necessities as their neighborhood stores had been looted or burned.

As the church’s response to the crisis became known, we began receiving incredible amounts of donations: food, diapers, toiletries, plywood for boarding up broken windows, cleaning supplies, tools. And so, our focus shifted to receiving these donations and then distributing them back out to the community as quickly as possible. This remained a primary part of Holy Trinity’s work throughout the summer and fall of 2020.

We also joined with our neighbors as Longfellow Rising, a 501(c)3 nonprofit founded to collaboratively reenvision and redevelop the private and public spaces at Lake Street and Minnehaha Avenue affected by civil unrest. Honoring the uprising that followed the police killing of George Floyd, Longfellow Rising is committed to racial equity, creation care, affordable housing, worker justice, cultural vitality, economic prosperity, and belonging.

In May 2020, there was so much we did not know: how long the unrest would last, how law enforcement and government leaders would respond, whether the officers involved would be arrested and charged with crimes, how much damage our neighborhood would endure, whether racist systems would be uprooted and replaced in response to worldwide outrage. Now, nearly a year later, there is still so much we do not know. Even during the moment of relief we experienced when we learned Derek Chauvin would be held accountable for the life he took, we mourned more Black lives lost to extrajudicial police violence. Holy Trinity’s emergency response team mobilized to respond not to post-trial unrest, but to assist the Brooklyn Center community in the wake of Dante Wright’s killing by police officer Kim Potter. As we prepare for many scenarios, we are also reminded each day that to be people of faith means to trust that we are called to ventures of which we cannot see the ending, by paths as yet untrodden, through perils unknown.*

On Thursday, May 28, 2020, at 10:48 PM, at the height of the unrest, Pastor Ingrid sent this message to the Holy Trinity congregation:

White supremacy culture shows up in my life in a variety of ways, including my want to know the ending before I agree to begin. I learned early on that one ought to play out all of the possible scenarios and weigh the potential risks and potential rewards before taking on something new. This behavior was termed prudent, judicious, shrewd—even, dare I say, faithful.

When we received the call late last night about attending to our neighbors’ most basic needs, church leaders did not have time to sketch out all of the scenarios, and we didn’t have the information necessary to do a thorough cost-benefit analysis. What we had, instead, were our neighbors—standing right in front of us and asking us for help. Turns out that Jesus rarely said, “Thanks so much for asking for healing. Can I get back to you with an answer in a couple weeks after our next committee meeting?”

Don’t get me wrong; I believe discernment is a spiritual gift. Anyone who knows me can attest to that fact. I also wonder if, when used to control, discernment can distance us from our neighbors. Prudence can impede our ability to listen deeply. Judiciousness can stunt our ability to love wholeheartedly. Shrewdness can cause us to spend so much of our lives protecting what is ours that we lose sight of the life-giving call to give away everything.

Today, I met new neighbors, watched donations stream in, witnessed strangers care for each other, observed the resiliency of Holy Trinity’s staff and volunteers, and felt the Spirit piecing our fragments together into something called beloved community. And I was reminded that if we had needed to know the ending before beginning, we would have missed out on the great beauty that arises even in the face of brutal violence.

A caller asked me on the phone today what we’ll need delivered tomorrow. I responded, saying, “We won’t know until tomorrow.” The truth is that we don’t know how this will end. The sun has set. The helicopters are circling. The situation in the streets is intense. The fires are again lighting up the sky right around us. We needed to temporarily evacuate the church building because of the blaze at the Pawn Shop on Lake, but we are now returning. (The apartments are also in good condition.) We are doing our best to care for those who are finding their way into this building.

We are trusting, now more than ever, in the Advocate, who leads us into new realities often before we’re ready and who always, always, always beckons us closer to God’s vision for the world.

Many people have asked how they can help our efforts.

We acknowledge that we gather on the Dakota Homeland.